Interview with my friend Dr Psycho

Dr Psycho is a filmmaker and a good friend of mine. He’s also a collector and when he’s not masquerading inside his dungeon plotting his next Dr Psycho movie, he’ll be in his video library reading a comic or even watching some movies. His home in the Midlands is filled with horror comics, books, posters, videos and DVDs and I relish the moments I spend in his marvelous vault of terror. 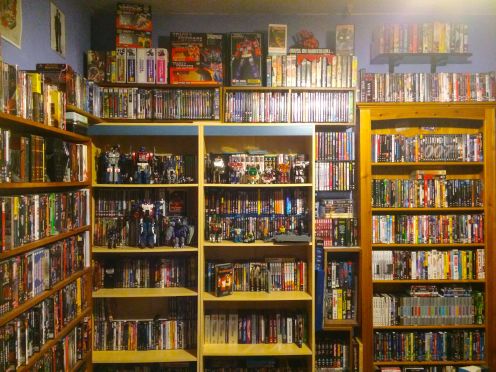 The video library has had a revamp. DVDs are carefully slotted into custom made shelving. There’s even old style video shelving bought from a local store that closed down. Dr Psycho’s library is better than any video store I’ve been to, there’s posters and memorabilia all over the room. Even the arrangements of toys are eye catching and I take my time appreciating the work it’s taken to breathe life into this space.

Spellbound by the never-ending DVD encasing, I ask Dr Psycho how he started what seems like a lifetime worth of horror.

“It’s accidental, it just started out as having one or two films as a kid, like Tron which was the first video I ever had. I managed to con my nan into getting me films from the video store like Nightmare on Elm Street, The Fly, Hellraiser and it just grew from there.” Dr Psycho says. “The whole intention was to make a heavy-duty library, not just a collection of films but a feature with the old video store set up and the limited edition boxes. So I converted it from a bedroom into a proper library.” 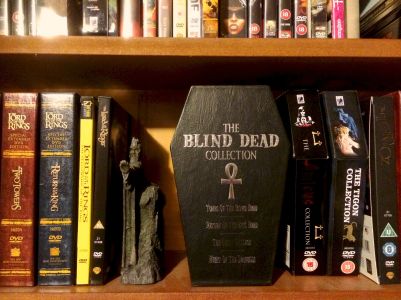 Dr Psycho’s intention for the video library experience has worked. There are boxes and sleeves from old video rental libraries, and memorabilia such as old Scotch carrier bags dotted around the room. Above the door is a video sign from the retro Cellar Rentals V/H/S event we once attended in London. It brings back memories of an era in which every high street had a video store.

“It’s like the malt shops of the 50s or the Victorian Edwardian era of the Barbers, where people used to meet for friendly chats. The video stores were like that in the 80s.”

Dr Psycho walks towards the custom made video shelf and shows me his collection of pre-certs and explains how the Video Recordings Act changed the film industry.

“Pre-certs are anything from before early 1985, everybody will tell you a different point as to when the actual law changed,” he continues, “Certified is when the system we have now with the 18, 15 and U came in, but before that there wasn’t a specification on the law. This caused problems, as you couldn’t tell whether some films were for kids or adults.”

“Effectively all the films for rental became banned. You could own them, but you couldn’t rent them,” Dr Psycho says. “Rather than trashing them, a lot of the video rental stores were selling them off at £30 a piece to collectors.”

“The 80s was a really exciting time, with technology such as the V2000 machine in its element. Nowadays technology is constantly changing and improving, but back then there were video games and home videos, there wasn’t anything else. You can’t ever recapture that time.” 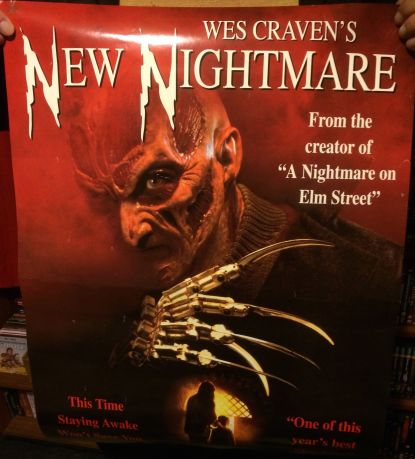 I marvel at Dr Psycho’s poster collection and he tells me how it began, “I started collecting posters in the late 80s early 90s from the video store. But today real poster art has given way to Photoshop.”

“I like Graham Humphries who did a lot of work for Palace films, his art work is just beautiful. I’d love to have Evil Dead I/II and Return of the Living Dead posters but that won’t happen unless I win the lottery and have a mansion!” 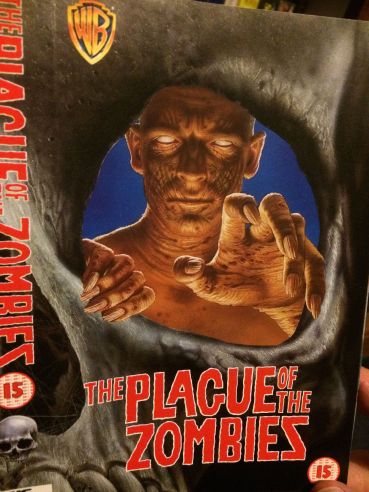 We talk about the most popular sub horror genre Dr Psycho has in his collection,

“I have mainly zombie films, although I’d like to have more ghost films as that’s what I’m interested in the most. There are fewer ghost films in horror,” he says “There’s vampires, zombies and miscellaneous monsters and of course slasher films, but a lot of people consider them to be thrillers.”

It’s comic book time and we make our way upstairs to the reading room where lie box upon box laden with comics: DC, Tales from the Crypt, Vault of Horror, Haunted Fear, are just a few of Dr Psycho ’s favourites which revolutionised the comic book industry and created modern comic book horror.

“Some comics changed the way comic books were viewed, as they started having twists in the tale and displayed lurid gory artwork. It was violent but it had comedy. If you read DC, you knew you were reading good stuff,” he says. “DC still has a line of mature readers comics under the name Vertigo which they started in the late 80s giving way to titles like Hellblazer and Swamp Thing,”

“Throughout the 90s and early 2000s Vertigo comics were outstanding. But they’re not so good now because they’ve turned into a line of creator owned comics and they’ve put their characters back into the DC universe. Nowadays Swamp Thing and Constantine hang out with superheroes.”

I wonder lies behind Dr Psycho’s deep-rooted obsession for horror. We all have a time or a place in our life that defines us as fanatics of the genre.

“It stems from my interest in ghosts when I was a kid and it was also the generation I was in. When I was growing up in the 80s there was Scream comic which only lasted 15 issues because of that evil woman Mary Whitehouse. I watched kids’ shows on television such as The Box of Delights which wasn’t horror but it was supernatural.”

“There was also Robin of Sherwood also known as Robin Hood which had Celtic folklore, mysticism, deities and people who came back from the dead all weaved into the storyline. Then came Scooby-Doo and He-Man and the Masters of the Universe TV series.”

Having made numerous horror films and with a documentary about making horror movies on a zero budget in postproduction, Dr Psycho has also interviewed notable people such as Ashley Laurence, Robert Englund, Doug Bradley and Axelle Carolyn.

“Axelle’s dog appeared in Constantine, a nice Dog called Anubis,” he laughs continuing, “Axelle was on one of the posters advertising the TV series Constantine. Her husband Neil Marshall directs some of the episodes. We interviewed her for the horror documentary in London.”

Dr Psycho has even introduced me to people in the past, including Barbie Wilde. You can read the interview here. It just goes to show that gaining access to people in the horror industry isn’t too difficult.

“Horror actress Marysia Kay once said, you meet the nicest people in horror, they’re the people who go to the conventions and say hello to their fans. They’re not like the Hollywood actors who treat you like dirt if you meet them. There’s genuine people in the horror industry.”

Dr Psycho finishes on an interesting note, a perception I quite admire and can associate with.

“People who like horror tend to like it very seriously but it comes with a lot of prejudice from others. There are a lot of people who tend to think you’re a serial killer or waiting to be and so it strengthens you because you know better.”

It’s been a brilliant day. I’ve been emotionally involved in Dr Psycho’s passion and life surrounding horror. Thank you Dr Psycho, to a friend who continues to educate, support and celebrate horror with me. We finish by going into his dungeon and he tells me his plans for the next Dr Psycho film. I may even have a role!