Into the Woods Review

Disney fuses Hollywood and Broadway with fantasy spectacular Into the Woods.

The tales gathered by the Brothers Grimm continue to provide inspiration for filmmakers and Into the Woods is the latest cinematic rendition of these popular stories. Here five of Grimm’s best-known tales are told and stitched together with songs and music because Into the Woods, as many may know, was originally a successful Broadway musical.

It’s an interesting cast made up of actors you wouldn’t normally expect to see together, especially singing. There is James Cordon (Gavin and Stacey) performing alongside stars like Meryl Streep and Horrible Bosses 2 actor Chris Pine. It’s a talented group. Corden has sung before in One Chance, the story of Britain’s Got Talent winner Paul Potts, and Meryl Streep surprised us all in Mama Mia. Not to be outdone, Chris Pine proves he can warble with the best of them. 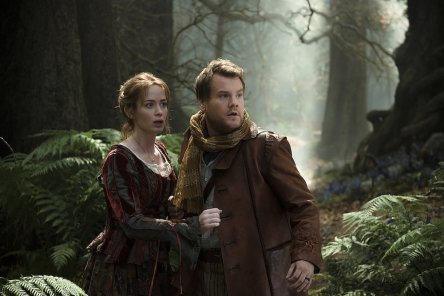 The baker (James Corden) and his wife (Emily Blunt) are cursed by the wicked witch (Meryl Streep) in revenge for the baker’s father stealing her special beans years ago. She curses the couple so that they’re unable to have children. Meryl Streep, strikes up a storm in the first five minutes of the film and belts out a powerful ballad confirming, as if we didn’t know already, that she is the star of the show. To undo the curse the wicked witch sets the baker and his wife a challenge. They need to find a cow as white as milk, a cape as red as blood, hair as yellow as corn, and a slipper as pure as gold. The successful completion of the task will not only lift the curse but at the same time break her own curse of ugliness caused by the theft of her special beans.

If you like Disney songs such as The Circle of Life (Lion King) or Poor Unfortunate Souls (The Little Mermaid), Into the Woods offers plenty more in the same vein, memorable songs that encourage a good old sing-a-long. Choruses break out in the middle of high-tension scenes and create emotional story transitions. Melancholic melodies contrast with upbeat harmonic musings to provide an award-winning score.

Into the Woods has a contemporary twist. As a parody it makes light fun of the cave-man mentality of its heroes. Princes jump upon stones, ripping their shirts open declaring their love in song for princesses Rapunzel and Cinderella. It’s almost Bollywood. And smartly satirical too as one prince declares, ‘I was raised to be charming not sincere.’

Johnny Depp reveals the darker side of Disney as the lecherous Wolf, who seeks ‘pink supple flesh,’ and hunts Red Riding Hood in the most perverse manner.

His performance is reminiscent of Tim Curry’s Dr Frank-N-Furter in the Rocky Horror Picture Show. The pedophile overtones of his song, Hello Little Girl, are unmistakable.

Although the stories of Little Red Riding Hood, Cinderella, Jack and the Beanstalk and Rapunzel are put together well enough, at times it feels like a Disney ‘mash-up’ mix tape, a crammed pastiche that has made its point by the 90 minute mark, but continues to tell the story.

The extended running time gives rise to a change of plot. A female ogre arrives in search of Jack who has, previously, killed her husband. The unexpected result is that the Baker, his wife, Cinderella and others decide to kill her. Effectively Jack gets away with murder, denies responsibility for his wrongdoings and they all live on, but not necessarily happily ever after. In this the message of Into the Woods becomes clear. The world is a cruel place.

This is musical theatre, a Sondheim extravaganza first performed in 1986 and making its mark globally ever since. In the original stage play the failure of parenthood was at the core of all that went wrong, from the curse of the baker and his wife to the witch’s rendition of Careful the Things you Say, Children will Listen. Much of that meaning has been retained for those who want to find it. Director Rob Marshall brings a lot of life into the film as it makes its transition from stage to screen and in doing so transforms it into something inherently Disney. But it has elements of realism. And these help to do what Disney does best, take a children’s story and make it entertaining for all ages.