A generous film commission, a two-man crew and a mysterious cult. That’s the set up for Adam Nevill’s horror novel, Last Days.

‘On the 10th July 1975, the Phoenix Police Department removed fifteen people from an abandoned mine in the Sonora desert of Arizona.’

Kyle is a struggling freelance documentary filmmaker who’s been approached by wealthy CEO Maximillian Solomon to make a film about the demise of The Temple of the Last Days, a religious cult. Kyle welcomes the overly generous, dare we say suspicious, fee but must complete the film within a very strict time constraint. And so he sets to work, tracking down a few surviving members of the cult learning about their former leader Sister Katherine.

‘The effect Sister Katherine has on her followers was nothing short of monumental. Life changing. And terrible. Her cruelty was exceptional.’

The story is told via Kyle’s diary entries as he travels across the globe, London, France and the USA, tracing the movements of Sister Katherine’s organisation. The cult might be dead but some supernatural agency strikes fear into the hearts of the surviving members. Will they tell all or will fear keep them silent? As Kyle’s quest continues he begins to wonder why his sponsor, Maximillian Solomon, has such an avid interest in the Temple of Last Days? 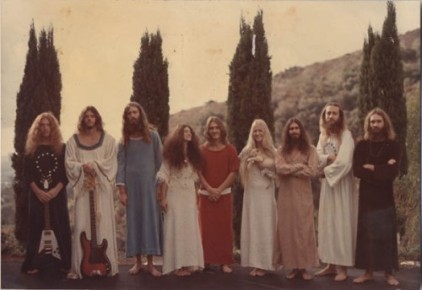 Last Days transposes many of the tropes of the found footage film into book form. It wouldn’t take much to turn the story into the kind of movie that obviously inspired it. It combines fact and fiction to give a detailed and credible background to the action. Every now and then I took to Google to search out names and events, like Blood Friends and Saints of Filth, just to see if they really existed. That’s not something I’d usually do when reading a novel.

Sometimes the overly detailed exposition overwhelms the story. What some might find fascinating might cause others to skip huge chunks of information-laden text in order to get to the next meaningful point in Kyle’s adventure. And initially I did stumble across a moment of disbelief thinking, well, that would never happen. But I ploughed on and am glad I did. The story eventually had me by the nape of the neck, like a lion to its cub, and it wasn’t long before I started to believe Kyle’s story.

Adam Nevill has succeeded in writing a novel that might well become a movie. He’s already had some success in that direction before. His book Apartment 16 was optioned for a film.

He creates believable characters. They certainly resemble people I’ve worked with in the film and TV industry. His characterisations are spot on: the struggling filmmaker, the geeky film lover, the grumpy cameraman and the nerdy editor. They’re more archetypes than stereotypes and the book almost pays homage to the artists and filmmakers, who, given Kyle’s opportunity, would probably put their lives on the line to make a ground breaking documentary.

Last Days is a visceral read. Despite the sometimes cumbersome exposition, characterisations are good and the action provides enough stomach turning moments for hardened horror fans. Prepare to be frightened and, like Kyle, don’t forget to sleep with the light on.