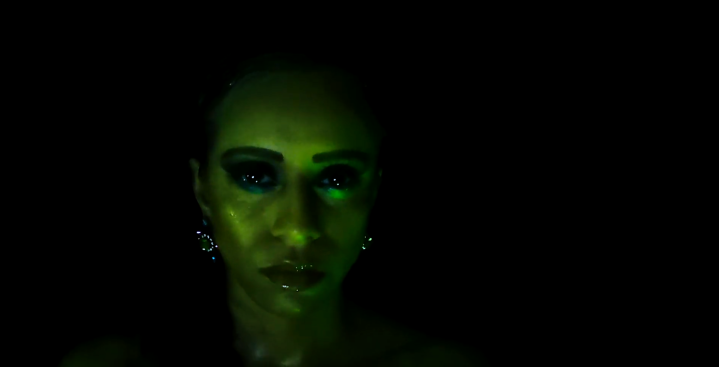 At times, being a multi-disciplinary creative can be both liberating and debilitating in the same breath. In the one sense, you’re releasing your artistic flare hoping that it serves as a cathartic and therapeutic outlet. Whilst on the other hand, there are many things that demand attention such as trying to survive or earning an income, that having time to squeeze in working on your own creations can become just another chore.

The need to exorcise that energy into something fruitful, to reap the rewards of just enjoying ‘making stuff,’ can present blurred boundaries of contentment verses the business acumen that could propel you towards the next level in your career.

Almost every holiday I’ve taken in the past has become an opportunity to work on a story, film, photoshoot, an experimental poetry piece, a texture-based canvas, a performance, a music video or whatever else ignites that desire. Even whilst self-teaching myself how to paint in acrylic and creating obscure works, I’ve had to pause and think whether the time spent is simply procrastination or will essentially lead to my next job. There’s opportunity in everything, but keeping that focus is one of the hardest things.

I understand that this sounds incredibly hard on oneself, but perhaps this is the artists condition.

This ‘condition,’ has provided me with many challenges over the years, in that I didn’t see my own worth as I got lost in providing others with my time and ideas. Pouring adoration onto those I was subconsciously helping, sharing my visions, artistry and as the French say ‘dépaysement’ for others fulfilment and getting ahead.

Forms of expression of which have come from my own cultural and traumatic life experiences which have influenced others. And instead of honouring myself, I would accolade others, a cycle that also continued in my personal relationships.

I didn’t recognise how much I inspired until I asked for help with some of my own projects and was let down, sometimes, in the most dramatic and uncouth of ways.

But at the same time, I realised that I must have been such an inspiration for those who went out of their way to betray me. After all, they all ended up wanting to do what I was doing! And, the irony is most have not.

Of course, these experiences are not with every collaboration I’ve had as I’ve worked with and continue to work with many friends and creatives who have stood by me. And of who I enjoy positive and deeply bonding relationships with.

Reflecting on my past has enabled me to plan my future with more clarity and realise all of my achievements in my personal works and abilities.

In my latest project during lockdown, I decided to express myself through performance poetry, a form of which I grew up with being into Hip-hop, Gangster Rap and Neo-Soul.

In fact, in my teens, I wrote for pirate radio MC’s and performed myself at a community radio station with a small ensemble. I was also part of the Black and Asian Writers Group in London participating in freestyling, theatrical and street performances locally.

Being a producer, writer, performer and director, I wanted to revisit my love for performance poetry and create something visual and expressive pulling together all disciplines from the vision, the performance and poetic elements which I stand for and that is me.

I wrote ‘Swarm,’ in an hour. I found a royalty-free track I really liked by KeyAnoBEATS on Youtube.

The next evening, I recorded my lyrics with my Zoom H4N, then laid down my vocals in Audacity, adding more tracks, effects and additional vocals.

Working on the track for many hours meant that I had memorised the lyrics in time for the film shoot I had in mind. I reached out to band The Scorpios’ music Producer Adam Bulewski who I’ve worked with in the past and asked for some tips studio production wise. Adam then offered to master my track once it was finished.

A couple of days later, the mastered version arrived in my inbox. By this time, I had already begun a weekend shoot in my house which I shot with my Huawei P30.

I created ideas for the set design and lighting, my vision as always tends to lean towards the surreal and I also wanted to ensure that it was also fairly provocative especially with the candid lyrical content.

I kept my make-up fairly simple but called upon my best friend and Make-up artist Sammm Agnew for advice for a particular glossy look I wanted to achieve in one of my setups.

The edit is what took the longest in trying to keep the video engaging. The film didn’t need a narrative running parallel as it was purely performance. However, because of the film’s expressive nature, I had to fill in the gaps with moments which reflected the lyrics by re-enacting with my face/body. This is an abstract form that comes naturally to me through my alternative fetish gore performance work.

Project Swarm has been a window of opportunity to face my challenges, to refocus and more importantly, realise my abilities and continue forth with all of my endeavours through a celebration of myself.

I have some more songs in the works and if anyone has music and beats to offer and wants to collaborate, please let me know! I’m always in need of tracks.

Please check out Swarm below and enjoy! A big thank you to KeyAno Beats for the track named: [FREE FOR PROFIT USE] KeyAnoBEATS POUR IT and supporting artists with your inspiring beats.