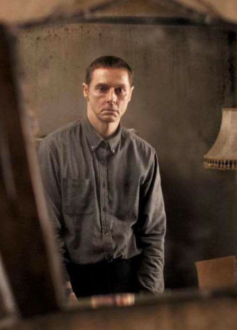 Arachnoid-Puppet horror Possum is the feature debut of comedian and writer Matthew Holness and, embraces you with more than enough oppression for its ninety minute viewing.

After being fired from his job, Phillip (Sean Harris), a former Puppeteer returns to his home town in Norfolk and the house he was bought up in by his Uncle Morris (Alun Armstrong). But returning to the house carries with it memories of the past where his parents died in a house fire. Unfortunately, Morris hasn’t done any renovations since the inferno leaving the house to decay from neglect with the scars of the fire remaining. Something, evident in himself as he takes little care of himself too.

Morris both goads and encourages Phillip to look at the puppets he used to make although Phillip appears reluctant to do so, already haunted by another fascination in the brown leather bag he takes around with him.

As he tries to decipher his haunted thoughts, he faces the creation he made called Possum, a hideous looking puppet-head with long thick hairy spindly legs which glares at him from the bag. Traipsing across local forests and moorlands, he tries to get rid of it, but somehow it keeps on returning until Phillip discovers the reason for its existence.

Possum although stunning and shot in 35mm film, is reduced by what feels like a lack of a plot.

Asides from the very disturbing truth learned at the end of the story, the narrative is not strong enough throughout to carry forth the resolution.

We see Phillip wander in post-traumatic nightmarish hysteria from one location to the next but there’s a lot of surreal space where not a lot is happening story-wise, but is saved by Harris’ performance.

This is both the films strength and weakness. The strength being Sean Harris’ portrayal of Phillip, a mature man trapped in something deeply unsettling and traumatic. And his so-called Uncle Morris, a passive aggressive, letting on less than what he knows.

Harris and Armstrongs’ performances are tense as Armstrong plays the recluse, narcissistic wicked-step father type, forcing Phillip into a deep psychosis where he retreats to the terrified boy he once was.

The beauty of this film is the atmosphere which is akin to M.R. James’ Ghost stories with the morose English countryside, moorlands, forests, wetlands and flatlands. There’s a real sense of history in this gloomy British picturesque town.

Although there’s a lot of repetition throughout with Phillips regressions in the various locations, you can appreciate the surreal locale on screen because of its cinematic allure.

The Possum puppet itself is very creepy, and surprisingly fully revealed in the first act. It works well to scare even without the subtle animatronics, with just still shots of the thing staring. Whether this lessened the effect of the scares towards the end by revealing too much of the puppet from the start of the film is subjective.

The timeline can appear slightly vague as there’s a sense of 80s and 90s in the present day, from the décor of the house, to even the wardrobe choices of the characters.

Although believable, as many people still haven’t succumbed to advances of technology, the period of the film itself feels confused by the way the film is shot. It’s unclear whether this is meant to be a movie set in the 90s or if it’s just the décor which gives it that feel. There are some moments of clarity where you can understand it’s in the present day, but this isn’t very consistent within the overall style of the film.

Possum is undoubtedly served by Harris and Armstrongs’ thespian-led performance, though I wish there was more of it. There’s nothing more inspiring and exhilarating than watching a theatrical ensemble which exhibits the novelty of British theatre. This is where Holness has done us proud.

Possum is worth a watch for its nostalgic-ghost-story qualities and impressive production design.