Let The Right One In: The Stage Play 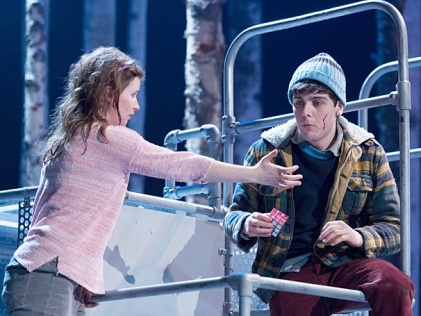 Let The Right One In is a play staged by the National Theatre of Scotland and is currently playing at the Apollo Theatre in London’s West End.

As you probably know, Let The Right One is a horror movie based John Ajvide Lindqvist’s novel. Theatrical horror is thin on the ground and often pales by comparison to their movie cousins. So I didn’t know what to expect when I took my seat in the theatre and gazed at the wintry forest that I saw spread across the stage.

I admit that I just couldn’t envisage this film being translated into a stage performance. I’ve been disappointed before by theatrical horror. I’m also happy to admit that I was gravely wrong. This play blew my mind!

Unusually, the curtain was raised before the audience entered the theatre. As we took our seats, actors, seemingly oblivious to our presence, walked across the snow-dusted stage, dodging between the huge tree trunks that stood there to create a forest-like environment.

Then the music began, a subtle signal that the play was to begin. More actors crossed the stage, this time running through the forest with greater urgency. They pirouetted and danced, walked in synchronisation, hands, legs and feet all doing body-isolation moves. It was highly theatrical, hypnotic and engaging. It made me feel good about being there.

The music, composed by Olfur Arnalds was just as beautiful as the original score, an enchanting work by Johan Söderqvist. But here the haunting orchestral sounds played an intrinsic part in the unfolding narrative. More than atmosphere the music seemed to carry us from one scene to the next, providing a backbone for the action. I’ve never seen music used in this way before in what was essentially a straight drama.

The story of Let The Right One begins with a murder in the woods, a young man is slaughtered like a pig and the news hits the local village spurring everyone into a panic.

Oskar (Martin Quinn) is a boy who is being bullied at school. The son of divorced parents, he is constantly tormented by a gang of classmates. His salvation comes when he meet a strange girl named Eli (Rebecca Benson) who witnesses his daily confrontations with the bullies. She encourages him to fight back, instilling him with a new found confidence. Soon Oskar realises that his new girlfriend Eli may need his help too and that perhaps she isn’t a girl after all.

Although the main set never changed, it had multiple uses transforming from forest to home, to school, bedroom, playground and swimming pool with little more than a nudge to our imagination. These transitions were flawless. Actors openly wheeled on props, actors took new positions and before we knew it the scene had changed. The use of props was fantastic. I won’t spoil it for you because you really should go and see it. The scene in the swimming pool is one not to miss and will leave you breathless.

Clever use of music and sound effects and the imaginative use of dance facilitated these smooth scenic transitions. A fall of snow provided an unforgettable spectacle. It was like watching a movie that was being edited before your eyes in real time.

Who would’ve thought that a theatrical experience could give you a more enriched and intimate feeling than the film? The score and the quality of the sound was so all encompassing that it was better than watching a movie at home or even in the cinema. It really made you feel part of the drama.

Albeit minimal, the elements of horror shone through. Blood, guts and suspense weren’t watered down and there were some effective shock moments that made the audience cringe and jump. Again, this is something we are used to seeing in the movies where we view the best of many takes filtered by an edit. But here, all the effects happened on cue right in the middle of the action. Kudos to the effects crew.

Let The Right One is more than a play. And more than a movie. It brings the best of both worlds together and gives you an experience like no other.

I left the theatre impressed by what I’d seen and touched by the beauty of the performance. This is a unique portrayal of one of horror’s much loved dark romances.

Go and see it while it’s still showing.

#writer #director #performer #womeninfilm #blackwomeninfilm #indianwomeninfilm #concepts #horrorfan #horrorshow #bodyhorror #transformations #mutations #artist #lifeforms #lifeforce #erotica #eroticism
Happy Earth Day everyone!
#Producer #writer #director #performer #entertainer #entertainment #occultshowgirl #womeninfilm #womenofcolourinfilm #womenofcolourinhorror #womeninhorror #artists #surreal #independentfilm #filmmaker #erotica #experimental #expressionism #horrorfan #horrorshow #horrortheatre #culture #horrormovies #cinema #worldcinema
As a young teen into horror movies, rap music and DMX (along with other rap idols of the time), when this album came out, I remembered enjoying opening up the booklet and gazing upon the other macabre images in wonder. I wish I still had that CD!
Although Women's Day is everyday, it's lovely to celebrate and take a step back in time to appreciate women's life work, basque in inspiring quotes and focus on all the good that's been achieved and all that's to come. What's more, to see where we all will play our part in this evolution.
Hairy talk with my film review of @justin_simien's Bad Hair film for @grimmfest Grimm Exchange Women In Horror Month special. Please check it out below⬇️

What’s on the cards this new week? The mystery Zodiac readings continue!