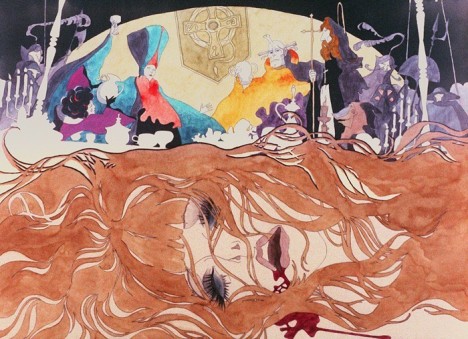 All Hallows Eve approaches like a rabid demon from the lower levels of the great abyss chasing you through the winding tunnels and passages of the vast labyrinth of the damned. The long, cold nights when the boundaries between this world and the next are at the weakest. For generations, countless cultures have associated this time of year with the dead, either fearfully or with honour.

Cultures like our own approached this time of year with fear in their hearts whether it be due to the dead returning to seek vengeance for crimes which lead them to their journey in the underworld or dark powers wishing to exploit the weakened veil into the abyss for their own evil ends. Yet we cannot deny we are drawn in some unexplainable way to these occult practices. This has resulted in countless examples throughout folklore, art, literature and since its inception Cinema. Whether it be in the form of the dark cults of heathen’s worshipping the strange icon of some eldritch star god that sleeps deep within the earth, Goat-headed humanoids bestowing fell blessings, tomes of forbidden knowledge that would turn the reader mad and the dark, cruel, evil things that lurk in the shadows waiting for instruction by their dark masters.

Cinema has had a long and in some cases strange relationship with the occult, even going so far as developing its own folklore in a very short period since its creation back in the 1890’s. Tales of cursed films, devil worship on set, or celebrity connections to satanic cults, or strange esoteric religions based on ancient texts. Some invariably more figuratively than others yet there are many that are literal.

These urban legends and the films themselves, weaving fantastical tales of witches and warlocks, sinister cults and malignant demons captivated my imagination as a child, drawing me into the monstrous rabbit-hole I dwell in today. So, to celebrate Halloween and this connection to the dark side of faith I commit 13 films to the eldritch gods of horror cinema. All with their bony fingers resting in the occult and dark arts.

While not technically a horror, this animated psycho-sexual occult drama is wonderfully mesmeric, each frame is art which constructs a story rooted in folklore. Directed by Eiichi Yamamoto and based off of Jules Michelet’s ‘La Sorciere’ this tale of Jeanne’s fall to the devil is filled with sexual imagery, from the brutal tearing scene when she is assailed by the lord and his court at her wedding, to the emergence of the devil, a small phallic creature that grows with her sexual and occult power. It also looks at class oppression, gender politics, the role of god and the church and societal collapse all in a myriad hues of watercolour and Ink.

This wonderful gem of a film from Writer Director Liam Gavin, and one of the first British films to make an appearance on my list, though certainly not last. The tale centres on Sophia Howard (Catherine Walker; Patrick’s Day, Dark Touch) a woman consumed by some terrible secret. In order to fulfil this desire she hires Magi Joseph Solomon (Steve Oram; Sightseers, The World’s End) to help enact a ritual to summon her Guardian Angel and request a favour. This film keeps the action tight, most of which derives from their strained relationship as they repeatedly enact this long and complicated ritual in a sealed house out in the middle of nowhere. As the ritual progresses strange things begin to happen but not in the way she had hoped. This is an amazing addition to anyone’s collection. This amazing film was done on a small budget, and at times the character chemistry feels awkward but this only serves to enhance the world the film occupies.

A true Hammer classic, in my opinion, directed by Terence Fisher and based off of Dennis Wheatley’s sequel to The Forbidden Territory, and one of the most well-known books in his Black Magic novels. In this case the Duc de Richleau (Christopher Lee; Horror of Dracula, The Devil-ship Pirates, Lord of the Rings, Star Wars, Sleepy Hollow) and friend Rex Van Ryan (Leon Greene; Flash Gordon, A Funny Thing Happened on the way to the Forum) have to battle the dark and cunning powers of a Satanic cult leader Mocata (Charles Grey; The Rocky Horror Picture Show, Shock Treatment) to save the soul of their friend Simon Aron (Patrick Mower; Frivolous Lola, UFO) and Tanith (Nike Arrighi; Sunday Bloody Sunday) , a young woman about to be accepted into Mocata’s sect. This fascinated my teenage self when I first read the book and watched the film, Wheatley had done considerable research into the field of occult magic and it is clearly evident, while the film watered down some of these to make the film more palatable to audiences it is still full of occult symbology, ritualistic sacrifices, summoning cycles, and occult astronomy. While to some it’s a little dated, the cast is amazing, from Christopher Lee’s knowledgeable and passionate Richleau to Charles Grey’s amazing turn as the insidious and powerful Mocata.

Also known as ‘The Death Wheelers’, this film directed by Don Sharp has its roots firmly planted in the witchcraft field. A biker gang leader Tom (Nicky Henson) uses the occult knowledge that his mother had imparted onto him to come back to life. He then begins to convince the gang to commit suicide in order to return as immortal beings free to wreak havoc on the town. I like this film because of how it plays with aspects of youth and occult power. The fear of growing up and rebelling against a society that doesn’t understand.

An awe-inspiringly grim tale of a family’s torment at the hands of dark forces in the 17th century. Robert Eggers has done an amazing job at creating a believable environment within the confines of his narrative, whether it was establishing the bleakness of their life through a combination of camera filters and dirt, or using language you expect from the era. I was particularly engrossed by the symbolism littered throughout the narrative that leads to the ending that was magical and in many ways sinister.

What can I say about this film that so many people haven’t already? This eerie journey through a pagan village isolated from the rest of the UK. This is a must for any collection.

I love this found-footage horror flick by Jaume Balaguero and Paco Plaza. While on the surface, it appears to be not directly related to the occult in the same way as some of the others on this list, as we explore the narrative it becomes evident of its connection to Catholic demonology. At first glance, we are presented with zombies infesting an apartment building and a news crew that stumbles into this hell while running a story on the Fire Department’s Night shift. However, these are all related to the demonic, and possession as the story begins to piece together. This and its sequel which picks up just a few minutes after the first about the Armed unit that enters the building to find patient zero. It uses the found footage style to enhance the fear and dynamism in each shot. The pathos to is exceptional with brilliant moments of fear, terror and panic.

Now Wickergirl is going to roll her eyes at this entry, mainly because she knows all too well that I’m obsessed with Japanese horror, and rank this highly in my all-time favourite list. We’ve moved from witches, cults, and dusty tomes of forbidden knowledge to honest to goodness curses. In this case, a cursed video. Sadako has become a well-known character in Japan, with three Ringu films, three Sadako films and finally Sadako vs. Kayako (or just Ringu vs. The Grudge), plus books and Mangas, not to mention the US remake and sequel. I love this film, from beginning to end, the constant oppressive atmosphere and the threat bubbling in the background throughout. All with the knowledge that no matter what, wherever you may be if you’ve seen that film you will die.

Honestly, I’m not a massive fan of Witchfinder General, whether it was over-hyped by my group of friends or because I had high expectations of Vincent Price. But really this film, with its historical inaccuracies, blood so vivid, questionable continuity (which on one occasion actually helps generate a sense of unease in the audience) isn’t a terrible film and worth at least watching.

While more thriller than horror, I can’t deny I quite liked this film. This entry is for those bibliophiles who were wondering which films are preoccupied with occult texts. The mythical tomes that contain forbidden knowledge or portals to dark realms of pure madness. Well, this isn’t it, but it’s close enough. Obsession and desire course through this film, as Dean Corso (Johnny Depp), searches for a set of prints that reveal some dark truth. This is definitely for those paranoia addicts as it’s full of conspiracy and manipulation.

W. Murnau is best known for his seminal Nosferatu and so to some this silent gem has been all but forgotten. This is the earliest rendition of the Faustian tale on film, and elements have been replicated on so many occasions since. A story of a bet between God and the Devil on the soul of one good man, the alchemist Faust. If the Devil is successful in tempting Faust to evil, then God will relinquish dominion over Earth. Set during the ruination of the Black Death, Faust is distraught that his medicine can’t help and agrees to a trial period. Of course, because of its age, the narrative is fairly predictable but the special effects, while novel by contemporary standards was cutting edge.

I genuinely fell for this film, not just because I’m a fan of the director Andre Ovredal, I loved Trollhunter too, but because it’s so well constructed. The mystery of who the woman is and the sinister truth that unfolds. The pathos too is fantastic, moody and slow as it builds to the finale. Fairly light on jump scares, though, in no way barren, more emphasis has been placed on building atmosphere and tension. Brian Cox and Emile Hirsch both give fairly solid performances as father and son morticians.

While this film might have little to do with occult by most peoples standards this does without argument occupy a firm grounding in magic and voodoo beliefs. Mickey Rourke offers up one of his best performances as the devastated detective Harry Angel. Along with the menacing performance of Robert De Niro as Louis Cyphre and sexually alluring voodoo practitioner, Lisa Bonet as Epiphany Proudfoot. The bleak supernatural noir aesthetic enhances the performances and tells a tale of suffering, redemption and ultimately the sanctity of the character’s very soul.