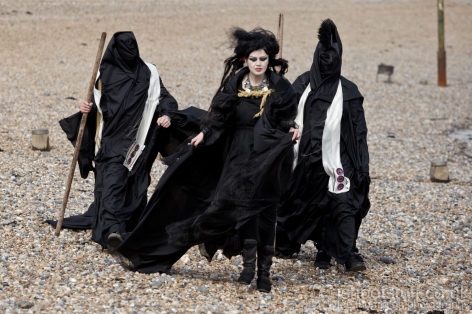 Who wouldn’t want to work on a rock video shoot for a band called Die So Fluid? Don’t worry; it’s a rhetorical question. When I heard there was a space on the production crew I quickly volunteered. It wasn’t just to participate in Die So Fluid’s latest video. It was also to work with video director David Kenny.

David Kenny is known for his gothic style. He combines the abstract and lashings of glamorous debauchery to produce some remarkable imagery. David Kenny puts the V in vampire, the L in lace and the H in hellish. I could go through the entire alphabet but you get the idea. 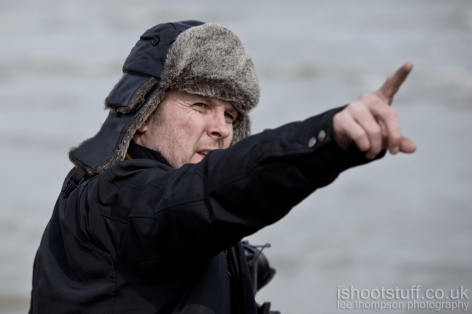 To celebrate the release of their new album The Opposites of Light Die So Fluid, David Kenny and his company Shash Media teamed together to share a monumental three days in the making of the Black Blizzard video.

Driving along the Dover cliffs, off the beaten track and up winding country lanes the band and crew finally arrived at a desolate lodge. The breeze from the sea reminded us that the grimy buzz of London was many miles away.

David’s envisioned a pagan environment for the shoot. And he couldn’t have chosen the lodge better because right next to it was a graveyard worthy of any horror movie. We were in Deal, once the busiest port in England and now a quiet seaside resort. I asked David what attracted him to this place.

‘Deal was my preferred location,’ said David, ‘and I worked the idea around what I knew we already had; beach, cliffs, amazing make-up by Sammm Agnew and young local people who wanted to be in videos.” 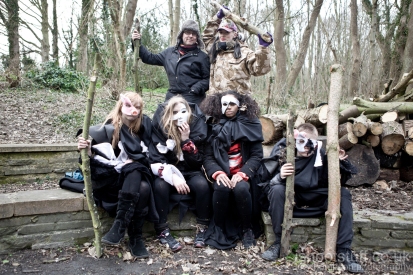 ‘In this video I wanted two things; first and foremost I wanted to capture two sides of Die So Fluid singer Grog Rox… Rock Chick and uber Glam chick…for my interest in high fashion and drama. Secondly I wanted to create something that I felt represented the darkness of the song in a style that echoed my personal interests in 70’s/80’s low budget film and television. Essentially English TV, such as Tales of the Unexpected and films such as The Wicker Man’

With over 10 years worth of musical history together, Die So fluid’s fierce leading lady and songwriter Grog Rox, drummer Al Fletcher and guitarist Drew Richards reflect on their motive behind new track Black Blizzard.

‘The concept for the song arose when I moved to America 4 years ago and I was really fascinated by the dust bowl black blizzard of the 30’s. Back then it had people travelling large distances purely to survive, they were also moving to Hollywood with hopes of making it in the film industry. There’s just a lot of symbolism in pursuing your dreams, also the dreams that society feeds you and how that can end up leading you to do very bad things,’ said Grog

Commenting on the overall sound of the track, Drew added

‘The song we’re doing today is probably about as goth as we get! We’ve also added some Arabic strings in the track which is going to be mixed by John Fryer who’s an uber goth. And there are points in the track where we go into 50’s country rockabilly style.’

Make-up artist and Shash Media regular Sammm Agnew made all of the props and devised the costumes for the shoot. And skeleton Frank made yet another appearance, this time scaring locals on the beach who approached the crew asking if he was real. Christopher and I set the props along the beach also lighting the oil drums with petrol.

With the shoot under way masters of doom and death… (Al and Drew) strode along the pebbled beach, oil drums raged burning fires. Queen of the Black Blizzard Grog flaunted her horns, along with her draping robes and diamond-encrusted jewels. Her calling certainly awoke the god of the sea, as the roaring waves crashed angrily upon the pebbles…and a little over Frank too. 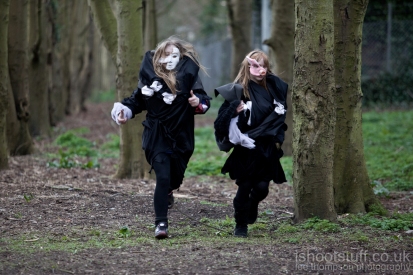 Danielle Franklin, Gina Woteva, Liam Smith and I joined the crew for the next scene ‘the children of the forest’ with childhood fantasy and much tomfoolery as spirited orphans scuttled around the forest. 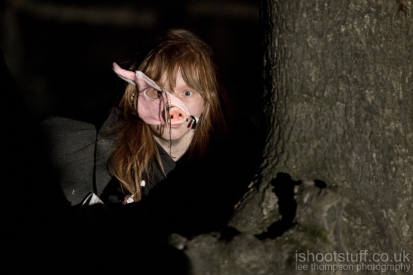 With David Kenny’s love for good old story telling, he explains his reasons for using vampires hungry for young blood.

‘I won’t go into the social and political aspects but everything that seems to be of innocence and worth in our world is soon destroyed by social and cultural influence. I am also a Dad and have a young daughter so have been reading lots of nursery rhymes etc and seeing how much a child shows interest in these kind of stories really interests me.’

‘It’s funny, when I read Cinderella I have changed things to suit my own beliefs…there are no ugly Sisters in my version, just Sisters. And there’s no wicked Stepmother just a Mum. They’re really quite horrible stories and I don’t believe in preaching anything horrible to innocence but on the other hand…if a Black Blizzard moves in then I can be very dark about it which was definitely captured in this video.’ 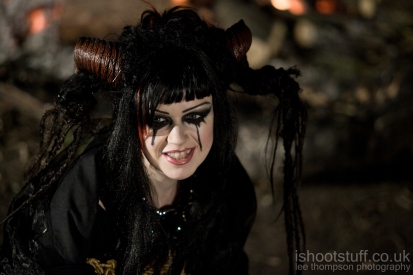 Apocalyptic weather conditions almost put an end to Grog Rox’s Dust Bowl vision. Up on the cliffs of Dover, the crew battled ferocious winds. The tripod case was almost lost to the skies and the dolly track needed concentrated guidance for the final shot. On the bay a dead porpoise lay washed up, its eye was missing and chunks of its flesh eaten away.  You can see why David chose Deal.

And if that isn’t a sign that the end of the world at nigh, then we’d better hope we survive the Black Blizzard.

For more information on Die So Fluid’s new album and Shash Media: