A few years ago, I went to New Orleans for the World Horror Con with my friend Charlie.

It has always a place I wanted to visit, so we planned to stay for two additional weeks after WHC in order to soak up the mysterious yet exuberant NOLA vibe.

It also gave us a great opportunity to visit Jason Matherne, a friend who specialises in horror sexploitation movies. Jason runs a production company called Terror Optics Studios. Most of his films feature a character called ‘The Cockface Killer’ who we were lucky enough to spend some time with. We also had roles in his latest movie at the time called, ‘Grimewave’ – there were many reasons to be in New Orleans at the time so it seemed.

Months before I left for New Orleans, I had been experiencing strange dreams and visions. Realising that since I was in the heart of a city known for Voodoo and magic, I felt that I should delve deeper into the Voodoo culture, religion and perhaps find out from experts what I was experiencing.

I’ve always been fascinated with spirituality and the occult within my own culture. My mother had various superstitions growing up, sometimes she’d even do little white magic tricks and healing on my siblings and I. When I was eleven years old, I begged my dad to hire a smoke machine so that I could play Mystic Meg in the school play. I had a small obsession with Mystic Meg, it was the only reason I’d watch the national lottery on television with my mum.

I was also curious as to the commerciality of Voodoo in the city, and whether people really believe in Voodoo or were more people using it just as a way of making money.

Since we only had a Sony NEX and one lens, we decided to shoot a guerrilla documentary about Voodoo and hoodoo beliefs in the city of jazz funerals and second chances.

With Jason and his friend Rikki, we started to research various renowned priestesses and spiritual stores. 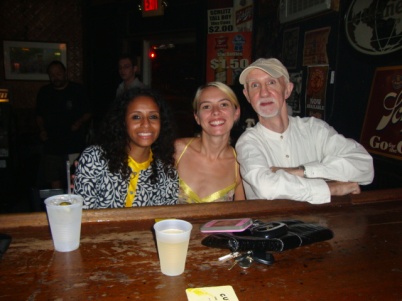 I contacted Priestess Sally Ann Glassman, and she agreed to an interview and gladly gave me a crystal gazing session. The reading revealed that I had been a witch in a past life and that the dreams and visions were because I was at a crossroad with my abilities returning. She told me that I could either let them be or to develop them more and suggested that I use the tarot to guide me.

This is actually how I began my tarot reading, and weirdly enough a friend gave me a beautiful deck of tarot cards not long after my return.

Priestess Sally Ann also invited me to the St Johns Eve celebration, where she and other priestesses would be honouring priestess Marie Laveau. You can watch the ceremony in my documentary.

Next was the highly acclaimed Priestess Miriam Chamani. I was excited when I visited her shop, enthralled by the myriad fetishes, concoctions and relics.

It should be said that at the time we were living quite far out and honestly, I didn’t expect Priestess Miriam to say yes. This was an issue since we didn’t have a light and had to improvise as much as possible in her temple.

(Actually, we improvised most of the time as you can see with the shaky footage). 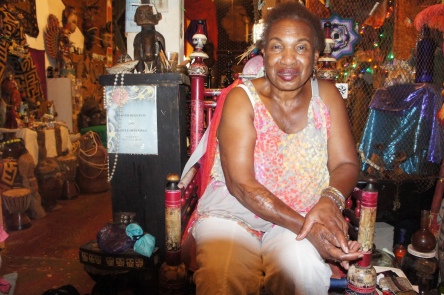 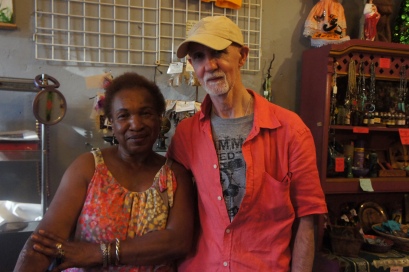 Charlie and I even got locked in the St Louis Cemetery No 1 whilst doing my final piece to camera. We jumped over the wall, just as the cops rolled past, sounding their siren briefly as they pulled over to interrogate us. I had to convince them that we lost the tour guide (we never had a tour guide) and weren’t sneaking in but trying to get out. He then paused for a moment and asked ‘You’re not from round here are you?’ Which was then followed by a warning to be careful as it could be more serious next time. 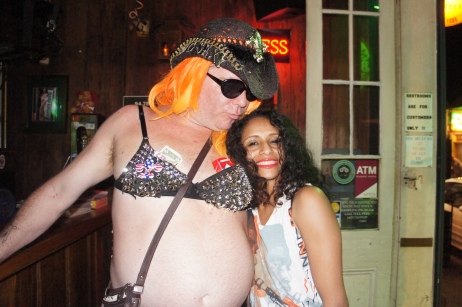 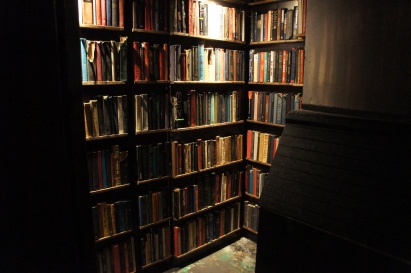 New Orleans certainly provided some entertainment, we got to spend an evening watching the formerly Big Sexy AKA The Cockface Killer work his day/night jobs walking the length of Bourbon Street in a cleverly constructed studded brasserie, getting people to pay him to take pictures with him. He also took us to a bar which had a secret library-toilet door, we didn’t know where he disappeared to until he showed us. The former Big Sexy also features in the documentary.

Charlie and I stayed in a local residence, courtesy of Air B&B hosted by a guy called Jay. He took us along a road filled with houses still in ruin from the hurricane. He explained how water levels went beyond the first floor of the houses. He showed us another one of his properties down the road which he was working on.

Crumbled stone, brickwork and water damage were etched across the whole of the house and vines now crawled from the inside out. It was like a ghost house.

It really made us realise just how bad the hurricane was which stirred a different, overwhelming feeling than previously felt when seeing the news on television.

As the saying goes, and in some cases, you have to see it to believe it.

I remember Jason also telling us horror stories about how he was wading in the water amongst graves and skeletons exhumed by the floods.

I also met a guy who told me about his experience during Hurricane Katrina, as he detailed the appalling conditions suffered by both himself and his mother when they had to flee their home to shelter at the Superdome.

He explained that although they lost everything, eventually it was better to leave the Superdome than suffer inside the stadium.

It also made it clear that post Hurricane Katrina, tourism became more of a priority, so utilising the city’s historical, musical, entertainment and cultural heritage in abundance was and still is the only way for locals to recuperate and rebuild their lives.

My time in New Orleans was a blessed one.

But on my return home, I learned that my grandfather had passed away the day after I left. The family had felt it best not to tell me, because they didn’t want to ruin my time away. They had waited for me to come back to have the burial, and he was buried a few days after with the funeral already planned and awaiting my arrival.

It crushed me deeply inside. I remembered that he was in hospital and that he was fine, and talking and we were planning his aftercare. He even gave me £200 for my trip and told me to stay safe.

As I left the ward, I saw him wave goodbye and heard him telling the other patients proudly in his Jamaican accent ‘That’s my granddaughter!’

I always have the immediate thought of ‘I never got to say goodbye,’ and then I realise, that his final wave goodbye was perhaps him saying goodbye to me, he knew he wasn’t going to see me again, yet I did not.

Looking back, it feels so strange that I was in a city filled with spirituality, learning all these things about voodoo, hoodoo and myself, yet I didn’t know that Papa had passed away.

However, soon after the funeral, I was reunited with Papa’s brother, my Uncle and cousins and learned that my Uncle is a respected spiritualist and witch in London.

After spending some time with this side of the family, I discovered many things about my Papa and found out that he too had psychical ability.

It all felt relative, being led to New Orleans, making a guerrilla documentary where I was advised to delve deeper into my psychic roots and then I learn so much more about Papa and his side of my family.

This is another reason why putting together this documentary has taken so long. At first, I started cutting it myself, but I just couldn’t do it. There was too much emotion bound into experience and far too much footage to arrange in a structured and entertaining way. I got lost.

Finally, I met Stephen Coltrane, a respected film and television editor in London who told me he would cut it for me. Stephen believed in the footage and the content despite its roughness. He helped me form the heart of the story in the edit and has helped to create an entertaining piece of work and for this I am ever grateful for.

I’d also like to dedicate this documentary to everyone who helped me make it a reality, but most importantly Jonathan Scott, who I just found out passed away this year in August. His store F&F Botanical provided a lot of the shots to piece together this documentary and his knowledge and perspective were greatly appreciated in the film. My condolences go out to his family and friends. It is always a shock to discover people you’ve met or been in the company with even if for a brief time, have gone. But yet I feel so grateful that I met Jonathan and that he welcomed us into his store, had an interest in what I was doing and was able to happily give us his time.

This has been a journey in both the creative and emotional sense. Without further ado, behold my guerrilla documentary ‘Voodoo Hoodoo and Gris Gris,’ and enjoy!

Inhabitants of the French Quarter