When working on a big project, this being my sci-fi body-horror From Me To You (you can watch my vlog here for more information), it can be a frustrating process waiting for larger creative projects to be completed.

Being an independent film maker where budget is an issue and yet with a creative fire burning in my stomach (and an expensive visual mind), sometimes, I have to find simpler ways of achieving my craft. 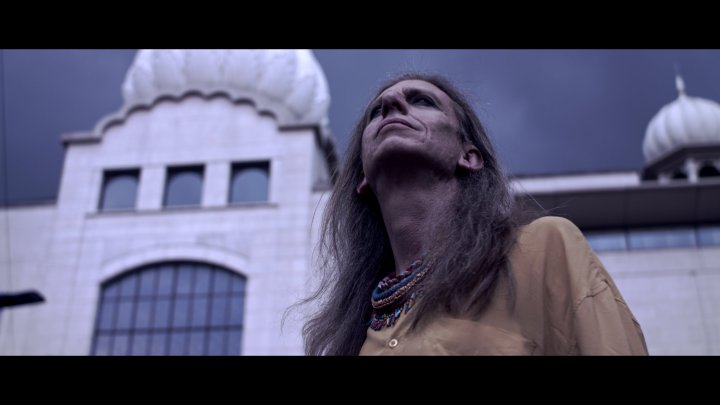 For a long while I had wanted to explore the area in which I lived during my teenage years, a place called Southall in Ealing, also known as Little India. Heralding a vibrant, diverse Indian demographic, it’s a place where immigrants settled when they first came to London in the 50s and 60s. The culture has remained, with Indian and Pakistani families still setting roots within the area. 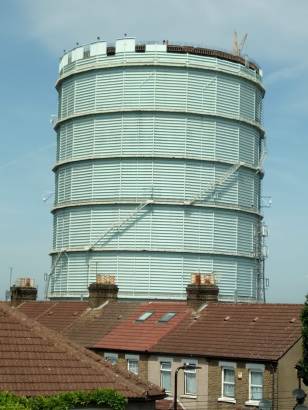 One of the landmarks of Southall was a large blue gas tower, there are not many around in London anymore, and sadly this one was recently dismantled.

The gas tower not only structurally served as importance to the area, but culturally speaking, with the words LH for London Heathrow painted on the panels. This was not just for the general public to know the area they were heading to after arriving in London, but it also served a similar purpose for pilots. 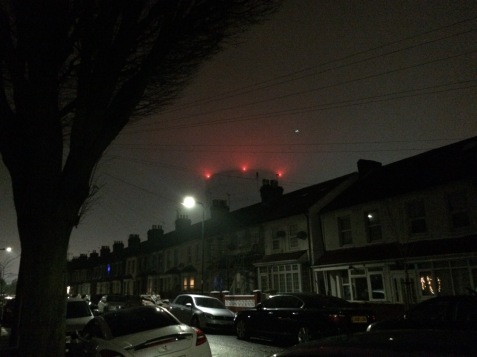 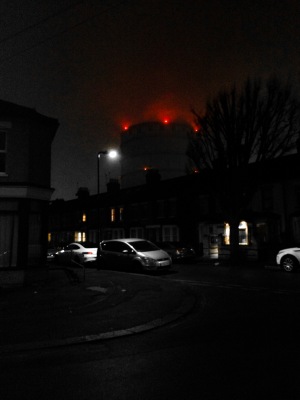 The gasholder itself was built in the 1930s. When I was a teen, I constantly imagined that it exploded resulting in a massive flood, with water cascading from the capsule slowly filling the streets and levels reaching beyond the rooftops of the houses in the area. The only problem with that was, the tower was actually a waterless model, so there was no chance of such fantasies coming true.

My dad’s house had a clear view of the tower from the front bedroom window, looming over the houses and shops with its signature red dotted LED lights spread across its circular parameter. On foggy winter nights, mist clung mysteriously around the tower, creating the perfect picture of a post-apocalyptic sci-fi movie.

Being inspired by the ghetto-fabulous, gritty-cultural but yet adding magical realism to the palette before my window, I came up with an idea to say goodbye to the tower before it was completely dismantled.

Having no budget, I set about looking for a collective who were also hungry to push their creativity to the maximum, but still work within our means. 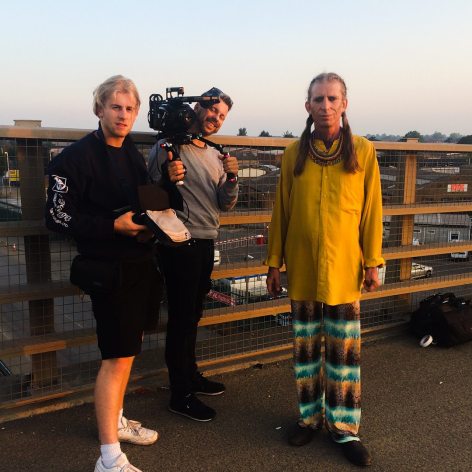 I had networked with Cinematographer Luca Rocchini a year before and remembered his style, knowing that he’d appreciate the somewhat grassroots approach to the project, and be flexible to try some of the experimental ideas I had. I advertised for an Assistant Camera on Mandy.com and there found George Nock. I then consulted the Delamar Academy for a Make-up artists where I found Olivia Watts. 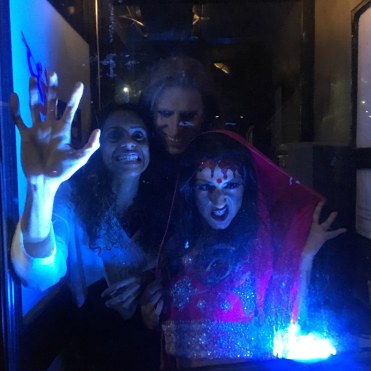 I immediately knew who I was going to cast, firstly with Richard D. Myers who is an amazing character actor, who for a long time I needed to find the right project for. Richard has starred in my latest film also and I hope to continue our working relationship.

And, my friend and model/actress/poet Pam Atwal who has put up with some of my other spontaneous creative endeavours over the years. Pam was also bought up in Southall, so it was good that we created a project that celebrated our cultural roots. 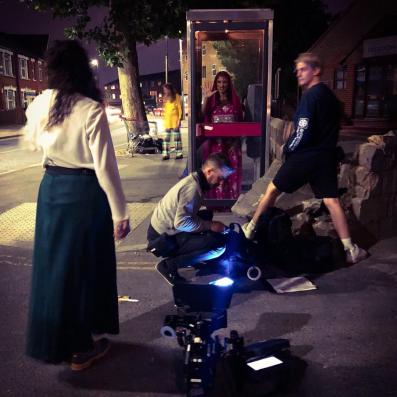 Together I micro-managed the team writing, producing, coordinating and directing our film. I was keen to edit the project and return to how I used to work when I lived in the Midlands. I always used to shoot my own work and edit it, but over the years chose to focus on producing and directing. Ultimately, I was really happy to use this project as a way of playing with ideas and themes which I’m experiencing in the transpersonal sense, and, as a form of expressionism without questioning whether it’s good or bad.

This has therefore been a really subjective project in the tactile creative sense. 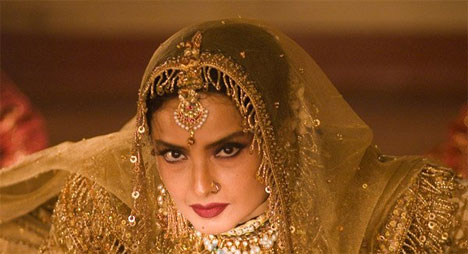 I took inspiration from Bollywood movies, in my head calling the project a ‘Bollywood-Horror Music Video,’ where you can see Pam as the beautiful anti-heroine, dressed in a traditional Lehenga Choli coaxing the main character (Richard D. Myers) to his final destiny.

In fact, one of my favourite Bollywood movies is Devdas (2002) with its decadent visage, strong female prowess through love songs, dance, seduction and tragedy which is pretty much the recipe for most Bollywood song and dance films. Another film I admire in terms of femininity and fierceness, is Bollywood movie star Rekha’s performance in a film called Yatra (2006) in the ‘Jann-e-Mohabbat,’ dance scene. 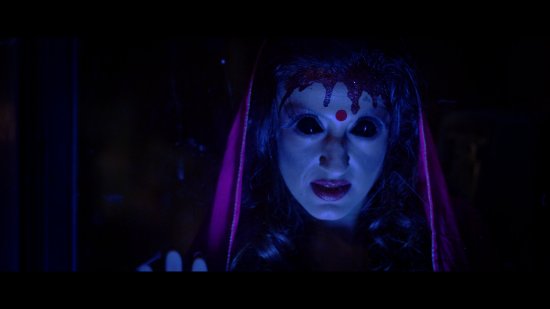 In my film, I had Pam play an Indian Demoness in the dazzling, hypnotic, elegant provocative way in which we see women represented in Indian cinema, but taking on a much darker twist.

Being immersed in the VFX world with my freelance work as a VFX Production Coordinator and also with From Me To You film being quite VFX heavy, I discovered Luca Prestini, a fantastically switched on VFX Artist and his friend Maksym to help create the fantastical destruction of the tower along with some other creepy CG work which you’ll see in the video.

Luca is now my VFX Supervisor on From Me To You, as we talk every single day, keeping on top of talented artists, signing off on work left, right and centre.

Finding the track to the song was a challenge. Luckily, I put shout outs on various Facebook groups and finally found a song which really touched me in both the lyrical sense with the jarring but deeply affecting melodic sounds.

The group is called Major Parkinson and the song is called Munchausen by Proxy. I approached them after listening to several of their songs, most of which I loved, but this song really rang true to both DOP Luca and myself as one that would work with our visuals and within the narrative of their song.

They kindly agreed to let us use their song, to which was great to edit with giving me a lot of freedom to go crazy.

I hope to create more films like this and to keep the collective spirit alive!

If you in need of a writer, producer, director, director of photography, make-up team, editors, or VFX Artists, for quick visual turnarounds, I have a network of people ready to make your indie project a reality. Just e-mail hello@wickergirlproductions.com

Thanks all for reading and enjoy the video!