The Mysterious Town of São Martinho

I had been taking it relatively easy staying in the North of Portugal in the rather conservative town of São Bernadino. I was quite satisfied with living on a diet of fresh cabbage, broccoli and fish every day. Especially as the whole idea was to relax and enjoy the lavish coast I was residing within.

However, on a day trip to São Martinho do Porto, it was a challenge not to find something to do in this semi-developed sleepy town. For a start, there weren’t many inhabitants. Although there’s a few blocks of holiday apartments lurking neatly within the traditional Portuguese homes, it is a quiet seaside town with some charming quirks to investigate.

After eating home-cooked delicious grub at a local restaurant, I took a stroll down to the port. The side-winding dusty streets and slopes wasn’t easy on a belly full but still, the Mediterranean way is to take a nice stroll after supper and look forward to coffee and dessert on the way back. And, it’s a good motto to go by.

The ocean gleamed ahead of me and the waves danced, sparkling in the reflection of the setting sun. I were just a few yards away from the promenade debating whether I should turn left or right when I was caught by a feeling which I could only describe as an aura.

Above me, steps to a place called the Hotel Palace do Capitão beckoned and I drifted up the stone stair into the mysterious edifice. 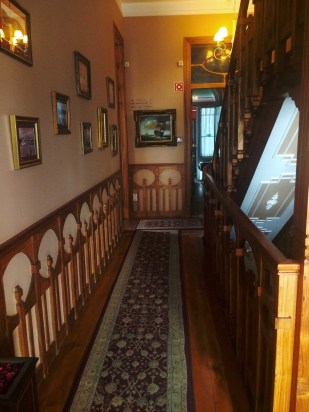 The receptionist greeted me, at first, I asked whether I could use the toilet, but I was distracted by the strong presence I felt in this place.

After using the facilities, I enquired whether I could look around, and to my surprise the receptionist agreed and seemed both happy and amused at my fascination.

The walls were made from wood panelling, a similar aesthetic to 16th century Tudor architecture…and the types of homes you’d see a Victorian séance taking place. Staircases also had intricately carved wooden bannisters, and at the centre point of the staircase, an oil painting of the sea loomed, like something out of the Innsmouth. I wondered if I were to lose myself in those oil colour waves, I might catch a glimpse of the deep god Dagon hiding in plain sight. 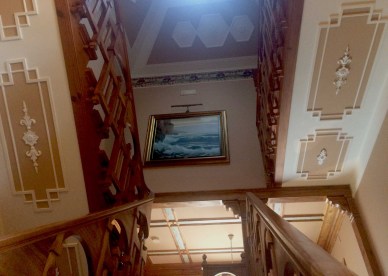 I then made my way down to what appeared to be a tea room, with a few tables and chairs. But the next room, was where I heard all the noise! Again, distracted by what felt like the stain of a colourful past, I could hear cheers, clanking of glasses, laughter and folly. I waltzed into the main room, with curious adrenaline racing through my veins, into what you could call an audio apparition. Again, tables and chairs were scattered around the room. Cabinets were filled with a multi-coloured rain box of bottles that assembled the wide collection of spirits.

Ahead of me a beautiful view of the ocean sparkled, as if the room were a ship, but yet you could tell that this was a traditional sea-view.

Walking back towards the reception, I glanced at the walls in the hallway and could see family portraits. I immediately felt that this was perhaps a Captain’s home or a place for sailors to party after long voyages.

Later on, I found out from a local restaurateur that the Hotel Palace do Capitão actually belonged to a wealthy constituent.

“He only had one leg but he had nine or ten children, many lovers and he had many brothers. It was a really big family!”

On the way back, I stumbled upon what appeared to be an old spooky looking hotel. Despite my great hopes of the dwelling having a creepy history, I was told that it isn’t haunted and in fact will be reopened as a trendy restaurant.

No local-town trip is completed without a visit to the cemetery, especially in Europe where tombs loom and chronicles of life echo through towering vestibules. 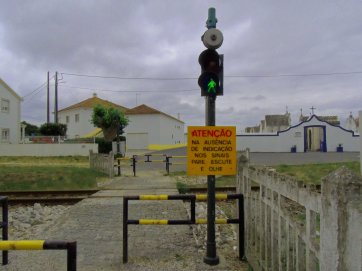 I crossed the quaint railway, with a grave sensation of the past dusting over me. Had I suddenly stepped into another era? The first time around, I had actually dragged my mum into the cemetery, but I was so taken in by the spirit of São Martinho, I came back and took photos with a better camera.

This was like no other cemetery I had visited before. 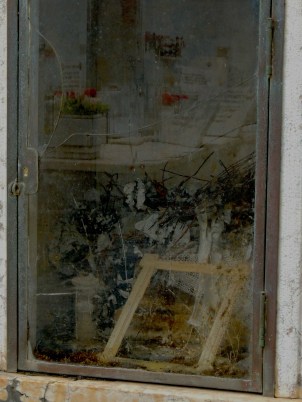 Inside there were mini-tomb-houses, some very old, but inside shelves held aloft multiple coffins. There were houses of coffins where families were buried together.

“Simret, you really shouldn’t be taking pictures of the family graves,” mum tutted clearly unimpressed by my research. I’ve visited and photographed some of the biggest cemeteries in Europe and most recognised internationally, yet never had I seen such accessible doorways shielding families of the dead. It almost felt like I was visiting rows of cottages, both offering my condolences along with cookies and lemonade.  I wanted to knock on those quaint doors, half expecting a hand to emerge around the edge and slide open the casket lid. 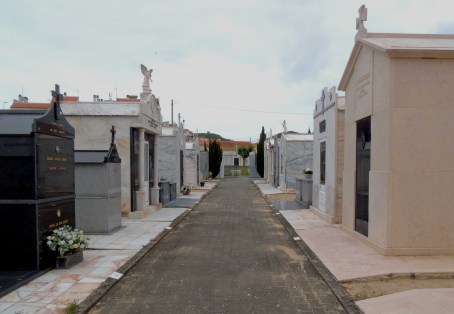 In the newer coffin-homes there were remaining shelves like angels of death waiting to embrace their destiny and be reunited with loved ones.

It’s a sentimental concept, that these small communes have been built, and still serve a purpose until this day. And, this tradition continues with families remaining together through life and death.

It’s incredible what you can find in the smallest and unassuming of towns, but that day, I was touched by the spirts of São Martinho.

The Ranger Review »
« Hospital de Bonecas AKA The Doll Hospital

One thought on “The Mysterious Town of São Martinho”