There couldn’t be a more apt time for me attending Dr Carnesky’s Incredible Bleeding Woman show as I was confronted with my own 7-year menstrual suppression in this surreal play.

The truth of woman’s menstrual cycle was philosophised, researched and practiced on stage by six artists, each performing their innate and self-actualised relationship with their cycle through various personal and cultural rituals. 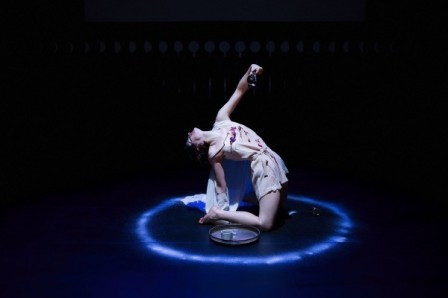 Beginning in an educational yet blood-soaked fashion, anthropologist Dr Carnesky impresses upon the audience a history of menstruation. Dishing out the crud on menstrual taboo, religion and mythology. Reminiscent of a TED talk, Dr Carnesky presents statistics, graphical and video projections which interlink the performances and gradually introduces the performers/characters’ stories.

The Radical Anthropology Group is where it all begins, with the union of women called The Menstronauts who then perform ritualistic practices during menstruation so that they can become synchronised with each other, manifest incredible energies and embrace the more often than not stigma that comes from monthly hemorrhaging. 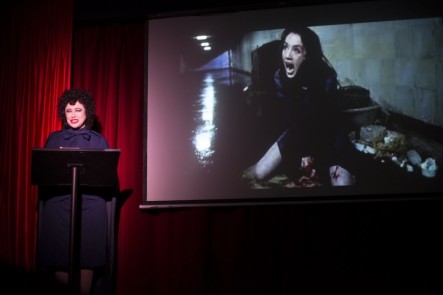 At her podium, Dr Carnesky queerly divulges how women throughout the contours of time have been subjected to shame, ridicule and isolation, from Medusa to Kali and even the representation of women in horror movies, always drenched in blood and fighting for their dear precious lives, a relevant reference to this was an image of Carrie which flashed upon the screen along with other Scream Queen allusions.

This was a brief but necessary telling to convey the trespasses of womankind, branded by her blood.

The Menstruants’ rituals begin with a small introductory piece by Dr Carnesky, interlinking her study and how each Menstronaut has rejoiced, suffered, unionised and synchronised with her menstruation; a word that is embedded in your consciousness since it’s the most vocalised, chanted and sung word in the play through varying levels of expression.

Film footage acts as a backdrop whilst some of the performers saunter onto the stage to perform their rituals which were then analysed by Dr Carnesky back on her podium before moving onto the next ritual.

Dr Carnesky’s Incredible Bleeding Woman is quite an authentic piece; all of the performers on stage were near enough playing themselves as in reality they are cabaret and burlesque dancers, writers and multidisciplinary artists. I was also surprised to learn that The Menstronaut group does exist and every month you can find members walking around Soho celebrating menstruation in an effort to synchronise and expel the menstrual taboo.

Although the subject matter of menstruation does make a worthy premise for a play, it was difficult to perceive whether it was meant to be comedic, serious or a healthy balance of the both. Most of the ritualistic performances seemed touching and appeared to be serious, but were teamed oddly with Marisa’s speeches. Perhaps it was meant to be like this and left to the audience’s own interpretations of what they resonated with and reacted to.

The play also intensified and became more personal between Dr Carnesky’s character and other fellow performers which by the end acted as an advocate for a feminist movement, sisterhood artistry; a personal love letter to embrace womanhood/menstruation.

For the love of blood, I only wish that the performance had more blood-spurting action and exposure of just how difficult it is to be a woman bleeding every month from a more biological point of view. For years, I was scared of my own vagina having traumatic cycles of up to three weeks a time, annihilated by bloody congealing detritus floating and squishing in between my sex, a painful reminder that it would be another few weeks until it ended. It’s no wonder I’ve spent the last 7 years of my life avoiding them through menstrual suppression.

But for some a cycle also marks the death of a potential child. This was certainly an experience which Dr Carnesky herself shared and, who for years tried to conceive without success. This is a familiar story for many women who in return approach the meaning of their fertility cycle with dread.

According to tantric studies however, women don’t have to experience menstruation and can lead perfectly healthy lives through a process called ‘sublimation’ and various other yogic practices. It’s said that hemorrhaging isn’t healthy for women, often creating a severe loss of energy which is apparently less natural and beneficial to the body, creating disharmony.

At the end of the show in the bar area, performer Veronica Thompson (who also goes as the name Fancy Chance) who, performs an impressive hair hanger act and works at the Café de Paris with other renowned performers, came up to my friends and I thanked us for coming. It was ever so embracing and we spoke about the play and the how it felt for each of us to watch and almost face the subject head on. It’s not necessarily table talk, but perhaps it should be because that’s all part of dismissing the stigma.

Dr Carnesky’s Bleeding Woman is certainly the most original play I’ve seen in a long while, written by Marisa Carnesky, a performance writer/director/performer it seemed like a personal project and a movement that will continue to go on for a while yet.

I hope that it tours the world, matures, wows, questions and embraces others along its journey.

For more information on Marisa Carnesky’s work you can take a look at her website: http://carnesky.com/productions/