Congratulations to the BBC and Radio 4 for producing a new version of Nigel Kneale’s classic story, The Stone Tape, for Halloween.

I was lucky enough to be invited to the preview, which took place at The Crypt at St Andrew in Holborn, London. For lovers of the science fiction and the supernatural it was a star-studded affair with the likes of Kim Newman in attendance. Also there was one of my favourite movie directors, Peter Strickland, creator of Berberian Sound Studio and The Duke of Burgundy. Peter Strickland, along with Matthew Graham (Life on Mars), were responsible for this new version of The Stone Tape, a programme produced in binaural stereo, an effect that will make it all the creepier. 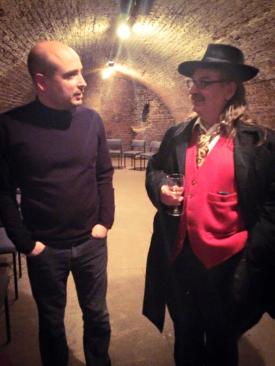 For those who don’t know, The Stone Tape was originally broadcast as a Christmas Ghost story for BBC2. This was in 1972. The seventies were a particularly fruitful time for British dramatisations of the supernatural. It was written by Nigel Kneale, the man who wrote the Quatermass serial for BBC television along with an especially chilling version of Orwell’s 1984 back in the 1960s.

The plot of The Stone Tape concerns a haunting but it was the melding of science and the supernatural that gained it a notable spot in the history of the paranormal. This is because the haunting was attributed not to the supernatural but to science. The ‘haunted’ house itself acted as a recording device for past events. The ghosts were replays of those recordings. This idea of Kneale’s became so popular that it was referred to The Stone Tape Theory in non-fiction books about the paranormal. Paranormal researchers were actually considering that Kneale’s explanation of hauntings might be a valid one.

As I write, you can see the original Nigel Kneale version of The Stone Tape on YouTube here. The new version to be broadcast this Halloween, and presumably be available on iPlayer for some time, is of course different. I won’t give away the plot but here are my thoughts.

In Strickland and Graham’s version we get a sense of the characters backstory and the circumstances which have led them to the house. The domesticity is well played, for example the relationship between Dr Leo Cripps and Jill is intense, she’s a fragile shell after a traumatic event and he’s an obnoxious unlikeable man who has a soft spot for Jill that undermines his arrogance.

The subtext suggests impending doom. Performances are convincing and make for uncomfortable listening with its quintessential English kitchen-sink dialogue.

The binaural experience connects the audience with the story in a different way because we’re forced to tap into a part of our minds where we can create our own visions of events as they unfold. The sounds effects heighten the drama and horror. Blood curdling screams and eerie ambient sounds ignite fear and there’s no aural equivalent of shutting your eyes to avoid the terror.

Although the take on the story is similar to the original, the radio play seems to tackle subject matters that weren’t perhaps expressed as strongly in the 70s. On this basis alone, it was a good idea to have remade such a classic aside from using the new technology.

It’s nice to see an updated rendition that retains the nostalgia of the original.

Radio has much to offer lovers of horror, sci-fi and the supernatural. As Orson Welles showed with his 1938 broadcast of War of the Worlds, radio has an immense ability to terrify. Anyone interested in the history of the medium can find many old time radio horrors preserved online. Try sites like this.

The BBC has been no slouch when it comes to broadcasting horror. iPlayer regularly features some of their best work. Radio is a great medium for the supernatural. We often listen to it alone. And with the lights out. The mellow voice of the narrator whispering into our ear. Put in some earphones for this new binaural edition of The Stone Tapes and you have everything you need for a very scary Halloween.