The Hidden House resides in an unlikely location. Westfield’s shopping centre in Stratford, but don’t let that dissuade you from the terrors awaiting inside.

Inspired by the Grimm Fairy Tales, the Hidden House is an attraction where groups are taken on a journey through a creepy house where characters from well-known fairy tales guide you or in this case terrify, luring you deeper into the house’s mystery.

Red Riding hood is missing. In true theatrical style, a character leads our group into a cobwebbed medieval kitchen. There are claw marks scored across the counters and cupboards. A window reveals a video projection of a real forest. Suddenly we’re told we have to leave. Our group is directed through the kitchen door and outside into a wintery forest, where our shoulders brush past snowy pine trees towards a back porch.

An insane Cinderella lurks inside a Victorian lounge room. It’s dusty as picture frames hang unhinged upon the walls. We’re held there for a moment as she delivers her speech. We’re then told to split up into pairs and each of us is led through different doors.

As my partner and I wander through the door and along a corridor, the lights flicker and something brushes past. The most unnerving sound passes my ear and I almost faint in terror. Nothing touches us, but the sound of glottal clicking comparable to a rattle snack wavers past. After running along the corridors we enter a small chapel. There are monks sitting, they’re meant to be the Seven Dwarfs. One of them stands up but we don’t look back. Instead we walk towards the glass cabinet where a body lies underneath a sheet. It’s Snow White.

Soon we’re reunited with the rest of our group again, but led into another room where smoke begins to fills the area – we’re being burnt alive! Luckily another character saves us and we jump into a narrow passage crouching down and into a basement for safety.

‘DON’T GO INTO THE BASEMENT!’ I’m sure it’s something we were advised at one point, but I will not tell you what happened as you’ll have to experience the denouement yourself. 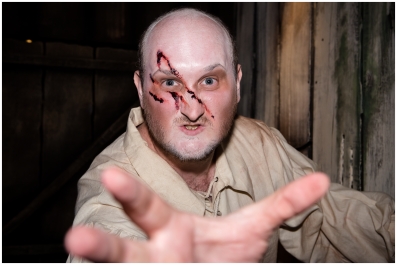 The Hidden House provides an immersive experience, designed so that you feel you’re the victims in a story where your own fate is undecided, until you participate of course.

Well-known characters interact with each other under the same roof and the variation in the storylines leaves the characters open for new interpretation. It’s not often you see an insane Cinderella.

The sound design is fantastic with seven tracks of SFX and audio, Samuel Bott the Managing Director even gave our group a special behind the scenes tour where we learnt about the daily upkeep of the house, such as placing new smell pots in the rooms, spraying cobwebs and ensuring that the banquets remain bloody, sooty and untouched. Samuel Bott is a true horror fan.

The concept of a hidden house maze is timely with The Original Folk and Fairy Tales of the Brothers Grimm published this year. And the popular television series Grimm is in its fourth season yet to be aired in the UK.

Go and experience the Hidden House whilst it still stands haunting those who dare to go inside!

The Hidden House is available until the 5th January 2015.