Louis Corallo is the DOP on my short movie Newborn. The movie is currently being edited but I thought you’d like to get a glimpse behind the scenes. In this post Louis talks about the actual shoot, the problems, the triumphs and the lessons we learn whenever we try to make our dreams come true.

Day 1 was nice
Day 2 was fucked followed by being molested which would of been nice if I was awake.
Day 3 was feet dragging all day and feeling like an abject failure.

The hall way scene itself was not that difficult in terms of lighting because despite being a day scene shot at night time it was not that problematic because there were no windows to break the illusion and of course there was a very talented and committed kiwi gaffer on board. What was most difficult about the hall way scene was the technical camera work. It is so hard to work with the camera when one cannot see the screen. The black magic is too difficult to use if one does not have an evf monitor attached or a decent and flexible view finder. I found myself having to point the moving camera without actually seeing what is front of me. The black magic camera delivers a wonderful image but to operate can be very difficult in due part to the screen. If the face is not positioned directly in front of the screen then it is not clear which makes image composition and focusing an issue. I often had to view the screen from a obtuse angle which meant it was impossible to focus or accurately set the aperture. 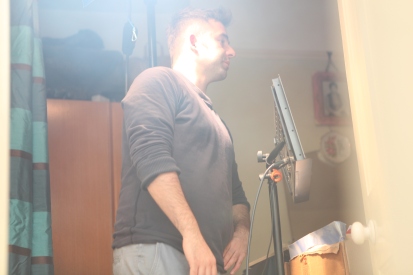 There were also problems with some of the working lights reflecting off the screen. I have worked with many cameras including RED, Alexa and film but never had I found them as difficult. In hindsight I would of asked for a small monitor that I could attach to the camera but at the end of the day I was dealing with the basis that we was getting the equipment for free and for that I considered us lucky and grateful. The Black Magic camera is a nice looking camera but it must be dealt with caution and plenty of understanding on it’s limitations. You can also say goodbye to wide shots because of the tiny sensor.

Even so I was exhausted I actually enjoyed the monster scene because of the make up design and the directors application of her vision. I think this is the scene where Simi really came alive (even at 5 in the fucking morning when her DOP was dying from extreme sleep deprivation). Maybe it is her hair fetish or maybe she is just a little bit fucked up but she is a natural when it comes to monsters. The scene felt so sexual and disgusting which added to the many what the fuck moments. I did not know what to expect but what we got was truly strange in the most wonderful way. I felt sorry for the actress when I saw her head get swallowed up whole by this strange creature made of bits of hair, piss and snot. I did not expect to see her head  completely disappear like that and I felt to excited to be filming that. This is a testament to Sammm Agnew who did a wonderful job on the make up and of course without the actress’s commitment it would never had happened. She was certainly not happy about having lots of disgusting slime on her face at 5am.

As we was shooting this scene I was concerned about Sam and Simi’s feelings on the lighting. They seemed to be so proud of the monster that they wanted more light on it which I felt would of killed the scene. The creature design is fantastic but I felt strongly that we needed to see less of the creature and cast it in shadow with only a shard of rain broken back light coming from a street light. I felt that if the creature was silhouetted that it would conceal the ‘man in a suit’ and keep to the monstrous illusion which would further excite the audience. It was in mine and Simi’s early discussions that we agreed to only show bits of the creature a little bit at a time because we wanted to make this scene amazing and to make the audience scream ‘wow’ at the sight of this strange hair creature. The idea is to only reveal small clues about the creatures form in order to maximize it’s effectiveness. This scene might had been hard but it was so strange and wonderful that I am sure that when we see the end result that we will be high fiving each other. Ever since that long night whenever I see a clump of hair I always see Simi.

I would not recommend shooting for 24 hours straight because for some parts I felt what we was getting was not as high quality as it could of been. It also damn well near killed me and it had a massive affect on my commitment and application the next day. However, what we got was really good and I cannot wait to see how it ends up after a good edit. It amazes me that so many people stayed on to shoot because it was within their rights to just leave. It is only with their dedication and strength that we manage to shoot such an amazing scene.