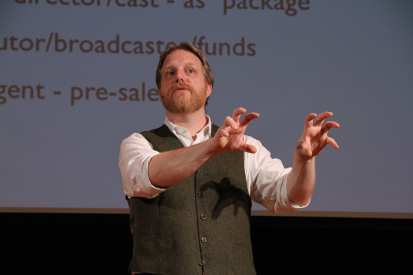 Industry professionals attended in hope of discovering the golden knowledge required to making a feature film a reality. And who better to share such experiences than Richard?

With over 15 years in the film business and one BAFTA award under his belt, Richard Holmes is the cream of the crop when it comes to independent film. Shooting Fish, Waking Ned and Eden Lake are a few movies out of many he has produced.

We were led through the day in a logistical and almost regimental manner. It was a step-by-step guide to understanding the role of the producer. There was a lot to learn and a whole day to learn it.

Richard began with the ‘tingle.’ You need a story that everyone talks about and can’t wait to see on screen. The tingle and the hook, both need considering before you turn that script into a movie.

Working as a content producer myself, this reunited me with the necessities required when beginning a project. Choosing, responsibility, focus on the project and stamina/persistence were outlined by Richard. Also understanding the difference between a proactive producer and a reactive producer. The latter tend to be executives. 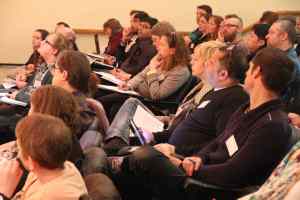 Imagine you have a script idea and it’s ready to go. What are the things you need to think about?

Well, it’s way too long to address in this post, but let’s just say development and the actual direction of the product is vital. For example, who will be involved, from actors, to distributors and broadcasters?

As I learned in this session, making a film is as much about the finances as creativity. An education on funding, development budget and the Seed Enterprise Investment Scheme is highly recommended.

Sadly, there is no one way of recruiting investors. But there is a system to abide by once you have finance, starting with the Financial Standards Agency system. All sounds rather tedious, and it’s the stuff of nightmares…no only kidding. It’s the stuff that may help you avoid prison. So you are well advised to learn everything you can and understand the potential risks ahead.

Richard also touched on the importance of casting and finding the right name for your movie to attract more attention.  Iain Smith had also talked about this in his seminar on Working in Hollywood. This, of course, means dealing with talent managers and learning how to barter.  As a producer you can often find yourself being passed from pillar to post, especially when an actor is technically available but might not commit because they have other offers on the table. This waiting game can result in pushing back the schedule and spending more money from a budget that is dwindling even more shooting has began.

An image of actor Andy Nyman popped up on the projector screen. Richard explained that Andy Nyman is one of his favourite people – a hard worker he said. I agree. And it’s why I have a personally signed copy of The Golden Rules of Acting that nobody ever tells you book by Andy Nyman.

So where does your film project fit in the grand scheme of things? Who is going to watch it?

Discussing his most recent film Jadoo, Richard tells us about marketing. For example, a film like Jadoo is a feel good family movie about Indian food. It has a chance to make foreign sales and be discovered by the widespread Indian community, something that will further enhance its marketability. Think audience and market when it comes to developing your idea. 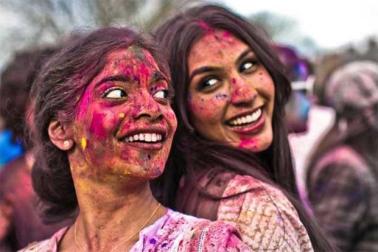 Tips came en masse and were provided throughout the day; the most shocking being that there’s no point in having a premiere unless you can get column inches in a newspaper. How do you get that? Have known talent in your cast. Who do we want Brad Pitt? When do we want him? Now!

Richard also advised going to Cannes, just for a day, to get your bearings and see where everything is and how the marketing of movies works. I think I’d rather go for a few days and wander around, find a yacht with a secret screening of something like Cape Fear…

Low budget independent film is a hard nut to crack, but there is a knack to getting it right. And a system – you can check out the Guerilla Film Makers Handbook for more references.

I think the next question is how to acquire funding, something which I hope the How To Fund A Film workshop with the Guerilla Film Making Network will cover.

Until then I’d better work on the tingle, possible market and audience.

One thought on “Advanced Producing with Richard Holmes”